So when you see those "quickie" comments between segments on say, for example VH1 - this is how they do it:

It is obviously most effective to get all the lines recorded prior to editing the entire episode of a show. For example, if a show, and we'll just use the example of VH1's "Best Week Ever", needs quickie commentary during various segments flashing across the screen, it makes sense to have the various hosts or hostesses simply record the commentary in one sitting. This saves time, reduces cost and sometimes can get outright silly. Of course if you were simply a passer by and saw this process in action, you would wonder, what the heck are they doing? And just why is she sitting in front of that ugly green background? This is just another reason to make good use of chroma key technology.

One never knows 100% for sure what will be running in the background as a clip, so it's easier to work with "raw" green screen footage for this purpose as this allows any footage to be inserted after the fact. 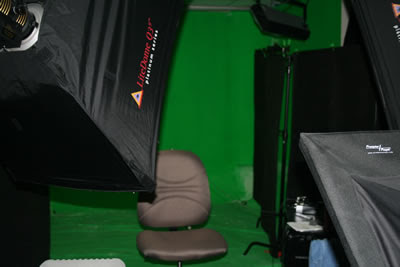 Ever wonder how the weather changes so quickly on TV?

OK, so we all know that the weather guys and gals are almost never accurate when they announce the future. Imagine if they were, wouldn't they be better stock market reporters?

All kidding aside though, have you ever seen a news report say on CNN, MSNBC, FOX or any channel for that matter where a live interview occurs? Typical examples are when the news has its so called "experts" chime in on a topic. These experts reside all over the country. So how do they get them on the air and live at that? To top it off, why is the weather that they are sitting in always different than the actual weather report of their location?
Recently I was visiting a buddy of mine that just so happens to be in the business of providing live link ups for just such interviews and purposes. He is a pretty smart fellow too. I suppose that's why he named his company"Live Link Ups". 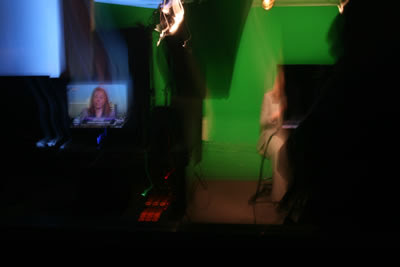 So where's the magic? And just why is the weather always nice in the background of the individual being interviewed?
Really it's no magic at all. This is all done with Chroma Key or so called "green screen", "blue screen" and even in some cases other colors. The interviewee is not actually sitting in the location depicted by the background. They are actually sitting inside a nice little temperature controlled studio. Behind them is typically nothing other than a green or blue screen (or wall). Better yet, think about your local weather person on your local news. Just how do they "jump" into those satellite pictures that they use, or the weekly temperature forecast charts that are life size? This is all done with Chroma Key technology.
Of course when broadcasting live, it does take a bit of pretty expensive equipment to accomplish this nicely. Using a green or blue screen along with the proper equipment makes it easy to "implant" any image or video as a background. This of course is the "trickery" or magic that makes things not only look nice, but can give the sense of location that the "live feed" is coming in from.
Other upsides or benefits are that one has more control of bystanders not messing up the interview. This is simply because if the background happens to be video, it was shot at a time without any other equipment than a camera. Hence, no one stops to look at a camera anymore, but they will stop and try to get in the picture if they see a camera, all kinds of other equipment and yes, an anchor person. Just watch your local news when they are out and about on location. People always want their 15 seconds in the spotlight. The national morning programs actually exploit that simple fact.
So why even bring up such a trivial topic?
Well on my last visit to Live Link Ups, my buddy decided he needed to get some new backgrounds for his future clientele. So he asked me if I could help him, and take a couple of shots for him. So off we went and got us some nice background shots of office buildings. The neat thing about this is, they are still shots, not video. Talk about an inexpensive way to make things really pop.

Think about it, with a Canon Rebel XTi (the camera used) we can shoot as many shots (good or bad) as the memory chip will hold, and select the "cherries". We could expiriment to our heart's content in a very short time. We didn't have to haul heavy cameras, use up tape (or film in some cases), and most certainly we did not become the center of attraction to passers-by. Cool. We just looked like two dummies taking pictures of buildings. Little did the passers-by realize that these simple shots would be what they will see on live TV. Even cooler.
Of course he still will need to take these images and create a CD, yup a simple CD of pics that he can load any pic off of and with his equipment drive the image as the background. Neat.
What if you wanted to do the same thing, but cheaply?
Assuming you are not going to do live broadcast on TV, but rather for the internet, you can do it quite cheaply. There are plenty of products off the shelf for very little money (less than $100.00) that will let you do the same assuming you have a webcam. Some of these kits not only include the software to run on a PC, but also include a sheet (usually plastic) of green screen and even have a lapel microphone. So why not go for it if you are going to do webcasts and such. Get the whole enchilada and expiriment. Trust me, it's alot of fun and the only limit is your imagination.
There are a few things you will need to know to be successful at it though. Keep in mind that lighting and sound are very important to get some quality productions out. You can learn all about these concepts from a variety of people for free on YouTube for example. Or if you need products from software to goods for such purposes, you will find many suppliers and vendors by doing some simple google searches.
Here are just a few:
Most of all - Have Fun!

This is the very first of what will most likely be many entries into this here blog. ;D

Yup, the day is finally here where I can somewhat launch my new website "VaderVideo - where imagination and imagery meet."

I hope to keep this site informative, entertaining and inspiring.

I do not plan to bore you with long drawn out descriptions of new products, but rather show you. I do not want to keep so called "secrets" to my self, but rather share them in hopes of helping you have a great and successful time.

So what are we talking about? We are talking about creativity with cameras, software and your mind. Truly, we must remember, this is where imagination and imagery meet.

As a first entry, I figured that I should at least exhibit just one thing that explains the above.

This is simply a 30 second spot that I submitted for a contest on You Tube. The contest was/is sponsored by LG and the theme was to produce a "Life's good when..." message. I literally threw this together from an idea I had and figured, what the heck. I made it into the top 20 and finals. Winners to be announced on Dec 3rd, 2007. I never expected to get as far as I did but rather did it for the experience and practice. One can never practice and experiment enough. In any case, having made it to the top 20, I at least won a cellphone from LG. Not bad.

The point is, anyone can do this, just keep it legal. Don't infringe on any one's copyright, ever! Whether it be video, photo or music, stay clean and be creative.
Enjoy: