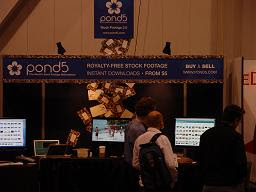 So I met face to face with the people behind the “curtain” at Pond5.com. (An interesting and nice bunch to say the least. ) These guys have figured out a very streamlined, efficient and valuable stock footage sales method. Pay the artist a nice chunk (50%), offer great customer service to both the customer and the artist (keeps both sides happy) and manage a ton of stock footage at the same time. What a concept, and what a chore.

These guys seem to have figured it out pretty well. I started submitting a little over a month ago with these guys, and to my surprise, when I returned from NAB, I already had sales! Now that’s making money while you are asleep, having fun or hanging out in Vegas at NAB. It just can’t get any better than that!

The Pond5 Guys and their humble booth: 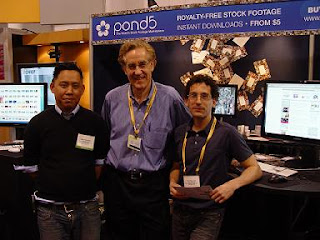 NAB (or National Association of Broadcasters) had an interesting phenomenon this year.. HD here, HD there, HD everywhere. Basically it was almost impossible to find anything of past resolutions any more. Yes my fellow photags, video gurus and film people – HD is here in full blast!

Sony had a gigantic booth. Canon had a large booth. Then of course there is Panasonic, JVC and so on. But Sony was from my point of view the busiest booth of all. The only problem with that was that I could not get any time with anyone to figure out my next “rig” purchase. Ok, so I may not be the most important videographer in the world. But it was virtually impossible to really get anyone’s time. And that is understandable by any means. Sony had so many toys out there, I felt like a kid walking into a candy store. Of course that simply made any decision more difficult too.

Actually, the whole show made me feel like I was going to have a sugar high. Everyone showed their latest and greatest. Cameras, cranes, and lights oh my! I can only say that I am glad not to be a journalist covering all this wonderful stuff. It would be overwhelming to say the least.
Stock footage is hot! If you shoot, then you should submit. There are many places to sell your footage, and many more to come. But this industry sector is learning quickly that what used to be common may not be so common any more. Competition is getting fierce between the various footage houses. Some have figured it out, and some are going to learn the hard way. But no one really does or understands the concept of automating the managed rights method yet, at least not efficiently for all parties.

Some of the facilitators are more cumbersome than others, and some need to let go of their ego to save themselves. It will be interesting to see how they stack up in about year from now.

B-roll, stock or whatever you want to call it, is here to stay and will grow immensely due to increases in the “Indy” world as well as more Internet based environments. Perhaps we will even see a legal battle in the film/video industry as we did in the music industry several years ago. Remember Napster? It’s all about staying legal, getting rights, and protecting copyright.

Now please don’t hold it against me for not getting into too much detail here. If I did that, this entry would be about 20 miles long and you would get bored. But if you really want to get the scoop on things, read, read and read more. There are plenty of journals, newspapers and magazines to confuse you, enlighten you and help you. Just my opinion. :)
at April 18, 2008 No comments: Links to this post