I have now been using Sony Vegas for quite a few years. Looking back, one must wonder how we ever did the stuff we did. I am not going to get into all the details of what has changed, been added, yada yada, on this new version, but rather focus on its stability instead. Did I mention its fast? In any case, you can get a full list of all the improvements and features at Sony Creative Software (opens a new window).  I am going to focus on something else. Did I mention it is blazing fast? 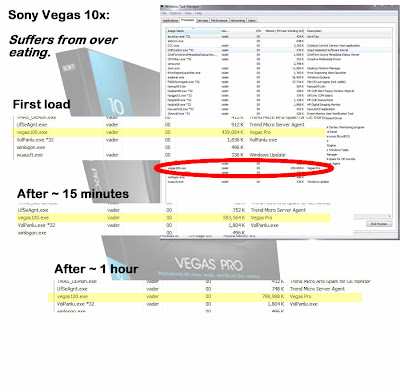 So what’s the work around for this issue? First thing – turn on “auto save”! Just in case. Second, when you take a break, and I recommend you do that at least once an hour. (Your boss will disagree here, I know.) Simply save the project, exit and restart Vegas. It does this so fast now, that it is a simple method and solution.  Whatever you do, don’t walk away and let Vegas just sit there for hours – it will keep “eating and chomping” until finally, you guessed it – there is no more. We all know what happens then, don’t we?
So, for those that are wondering – I have a Pentium I7-920 (8 processor threads available) class system with 6 GB ram running on Windows 7 Ultimate with an ATI Radeon HD 4800 video card. I did get an e-SATA raid box as well, as this type of speed or access was mandatory for AE CS5. Vegas will chomp at slower speeds, yes, even from good old USB 2.0 (4 year old) drives.  As you might have guessed by now, I  also have the full Adobe Suite. I like AE. I put up with Premiere Pro. But as I am used to Sony’s work flow, it is always a task to feel comfortable in PP. (This was punny huh? PP means Premiere Pro, not peepee :))  I suppose the truly fair thing to say is that I am biased towards Sony because I know the product very well. I don’t really want to change to another NLE if I don’t have to. My brain might explode.
at October 20, 2010