Observing with a neutral eye can end up with a positive experience.

Here in Tucson we have experienced a recent tragedy involving our beloved Congresswoman Gabrielle Giffords. I suppose I could delve into the back stories and all the things surrounding this tragic event, but I won't. There is no need to as the media has already done quite a job on that. Sounds pretty negative towards the media doesn't it? That was my first impression when I was called to get some "pick up shots" for a network. So with camera in hand, I started venturing out on Sunday,


the day after the incident and thought about what to film (I will not use the term "shoot" in this instance as it may be picked up as a bad news sound byte or something). I noticed all the news vans with their dishes mounted on top. The news crews getting all "gussied" up to look good on camera. The sound guys, the camera guys, the techs - fluttering around not really doing anything. Until those few moments when the up link is established and voila, spit out the news. Okay - I know, still sounds negative. So I thought to myself - am I any better? I mean, I am here with a camera, doing pretty much the same thing. Probably, eh?

But then, I had a thought. Actually more of a question. How can I do something that would be more positive. I am a stock footage guy. I sell footage! Perhaps there will be producers, news agencies, worldwide that need access to such footage regardless. So I proceeded to film on. The difference is, this time the proceeds will actually go to Christina Green's Fund as charity money. If you are interested or are in need of footage simply visit
Clip Bin of dailies regarding Tucson Tragedy - Congresswoman Gabrielle Giffords and buy every clip you can afford, as it will go to some good cause.

Okay, so back to the media....or should I say the circus. I headed on down to the UMC (University Medical Center) as I knew there was a vigil going on. What I found was the vigil, but even more so the media circus: 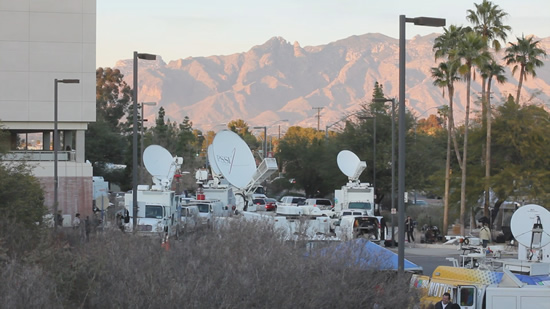 Almost scary, as it looks as if we are being invaded by aliens. But the truth of the matter is; this is what we all feel we need in this "immediate information required" world. As crazy, as nuts, as sensationalistic it appears to be - it is what it is. But when one digs down deeper or looks at this from a "macro" point of view, it actually gets better. The people that work these technical monstrosities are just that, people. They are humans that feel too. One such person, people or human made me think about this based on his actions and demeanor.  He quite simply proved this to be more than true. I watched this "celebrity" in his own right, deal with the public. And I have to say, it was an awesome experience. Here we have a guy that in my opinion always seems to be very pleasant, neutral and factual when he presents the news, and I have only ever seen him on TV. I discovered quickly by simply standing back and observing him that this is just the way he is. He is a pleasant, friendly and a thoughtful person, period!

I am talking about John King of CNN: After he was finished with his interview (live no doubt) he basically hung around and started interacting with people. Greeting them, taking pictures with them and plain and simply being friendly with all. But most interestingly he devoted quite a bit of time with three young girls. He let them sit where he and his guest sat. He mic'd them up (pretend). He told them where to look and how to look into the camera. He scripted their "CNN sign on and introduction" and then let them pretend to be anchors for a few moments. Perhaps this is exactly what these little ladies needed to help them have happy thoughts and distract them from the sad story directly behind them. Perhaps this quite normal and humble guy knew exactly how to heal the hearts of these children with a simple act of kindness and humor, but most of all, attention and time.

As he was doing this, he glanced over at me and noticed my "contraption" that I built to stabilize the camera. (Basically a fig rig - sort of) - He started talking to me and asked what exactly this thing was and how it worked. I explained, we laughed and we enjoyed the lighthearted moment. At that point it was inevitable - I handed my contraption over to another photographer and both John and I were curious if it was easy enough for anyone to use. Here is the result: 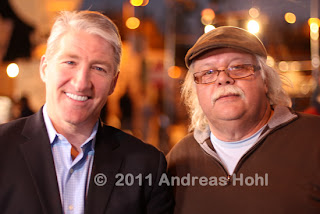 Just sayin' - Cheers to John King and thanks for making a memorable positive experience!
at January 12, 2011